We were thrilled to welcome Rev. Adam Ericksen as CUCC’s new Pastor in November of 2018. Please join us Sundays at 10:30 am as Adam continues his adventures at CUCC.

Check out Adam’s sermons and/or his blog – he’s got a lot to say!

In 2014, Adam, his wife and their children decided to move back home to Oregon. They first moved to Eugene to be close to his wife’s parents. Adam became a member in discernment at the First Congregational Church of Eugene, where he helped with the youth group. The Ericksens then moved to Tigard, Oregon, when his wife was offered a new employment opportunity.

While in the Portland area, Adam has led the youth group at Smyrna, UCC in Canby, and most recently served as the Minister of Faith Development at Lake Oswego United Church of Christ. 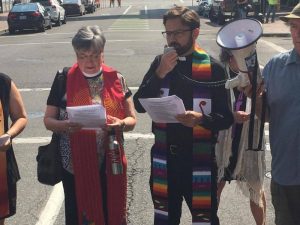 Adam earned a Masters in Theological Studies from Garrett Evangelical Theological Seminary, where he wrote a master’s thesis titled “Love and Nonviolence in Christianity and Islam.” He is a graduate of Linfield College where he majored in Religious Studies. He enjoys writing for the Raven Foundation website and the Sojourners blog. He also likes coaching his son’s soccer and basketball teams, making breakfast, long walks on the beach, and his favorite dessert is still chocolate chip cookies and milk.

Check out some of Adam’s sermons and blog posts: